It is a gorgeous almost-spring day today.  The sun is shining brightly, warming us through our coats. We decided to take a walk to River’s Edge Park with Murphy the Giant Puppy and the boys.  For its size, Columbia Falls boasts a number of nice parks (11, to be exact).  They contain playground equipment, picnic tables, etc…the normal park trappings. 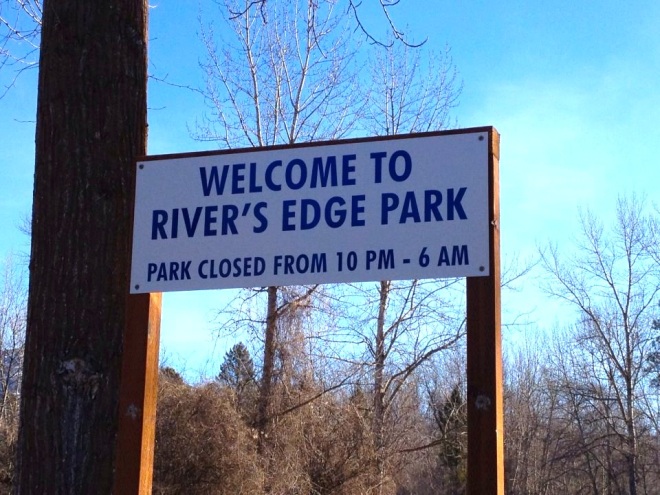 River’s Edge Park is special–it is a wide open space of nearly 30 acres and hosts approximately 900 feet of river front.  It is home to the Columbia Falls Community Garden, where I spend a whole lot of quality time during the growing season. 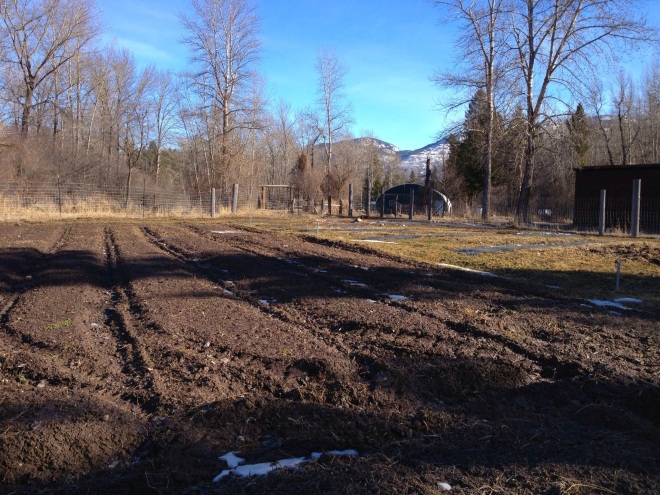 There is a muskrat pond, two vast fields, and many winding trails throughout our park. 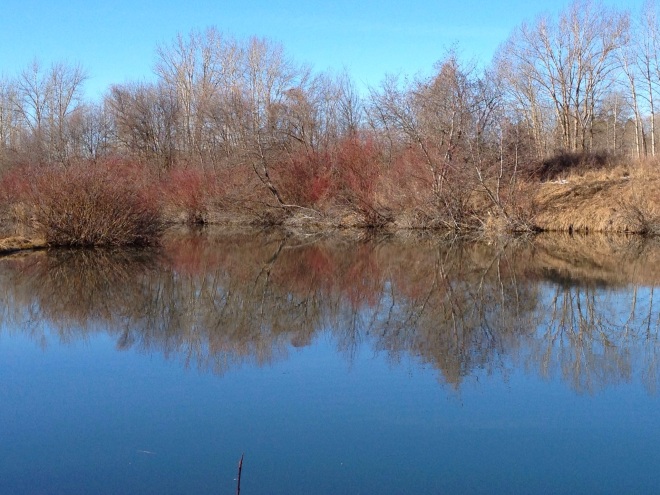 It is our favorite place to walk the dog. 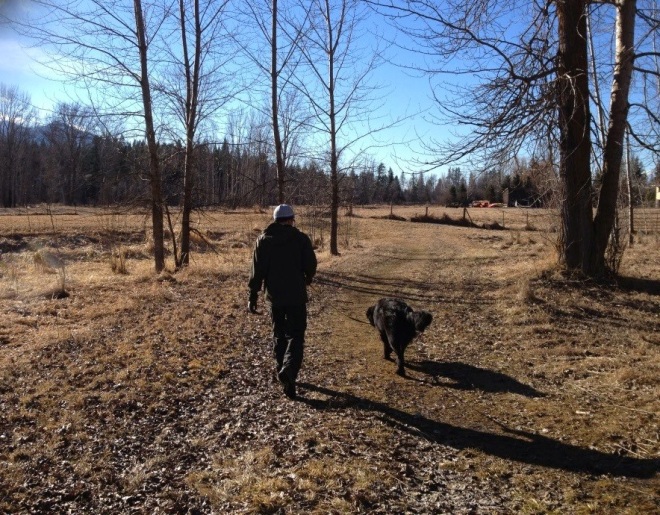 And to watch the birds.

To sit and watch the river flow by. 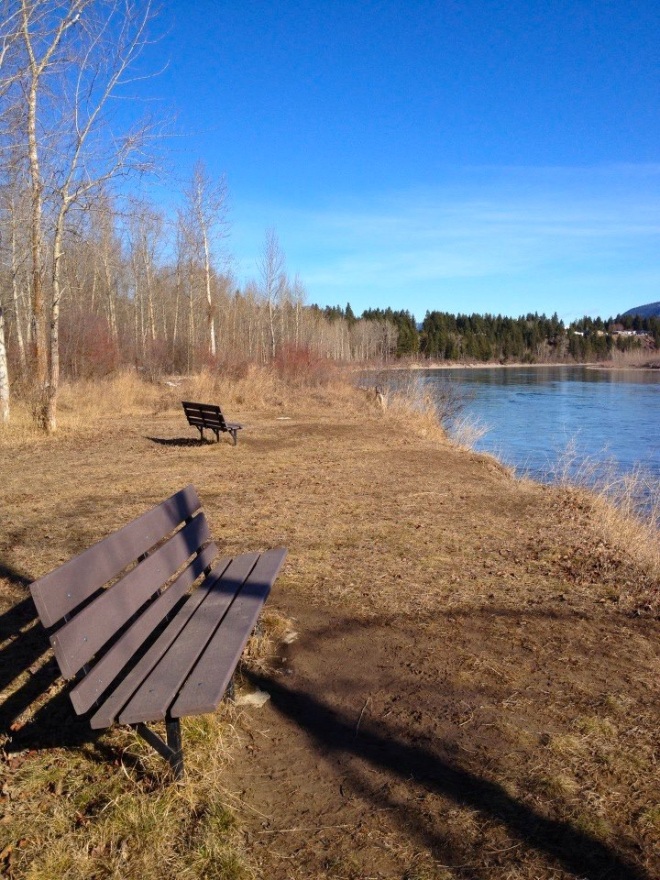 To throw rocks into the water.

To take the dog swimming. 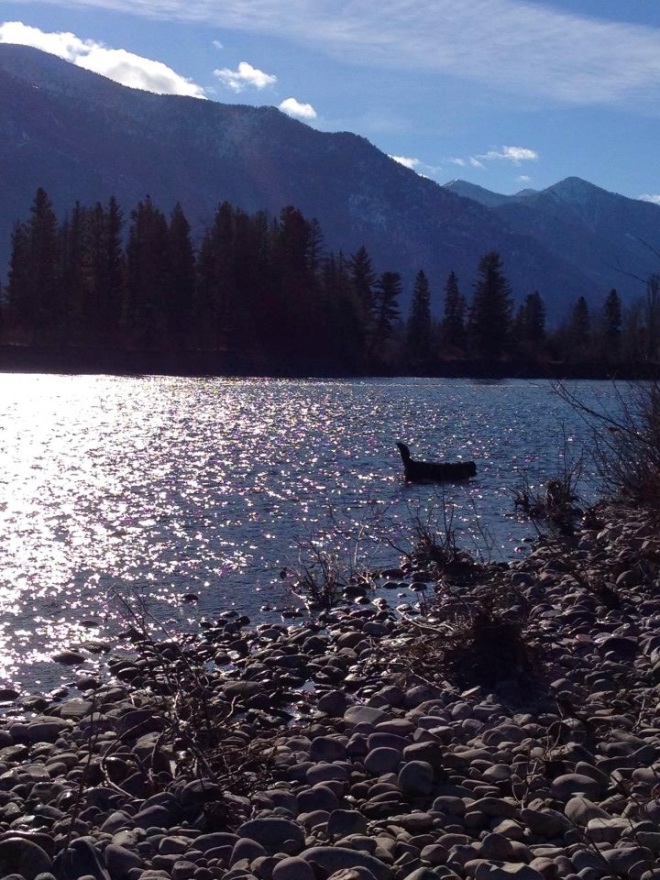 Just another reason to feel lucky to live in the Flathead Valley.

I have been working on a post of reasons I love Montana for a while, but decided instead to try it one by one–as they came to me–rather than trying to compile them all into a list or two or three.

So here is NUMERUS UNUS:

I love living in Montana, because wherever you seem to go, you meet someone who knows someone you know.  It isn’t even six degrees…it is two or three at best.  It is the nation’s biggest small town.  Everyone knows everyone.

Today, while at my acupuncturist’s office, we realized that she was married to a man who shared a house for a time with one of my very dearest friends from Michigan.

These “threads” (to borrow a word from my acupuncturist) may seem likely in a small town, but they also happen throughout the state.  The entire state of Montana is just a giant neighborhood.  I love the fact that I can contact the president of the MEA-MFT and will usually get a personal response in an hour or less.  I would never have been the one selected to go to Washington DC with other new National Board Certified teachers had I lived in another state.

I love that our mayor was the one we hired to do site prep for our garage, and that his daughter was my son’s fourth grade teacher.  She lives in a house built by the man who put the second story on our house.

When we go to a party, there are usually a few moments of “oh!  I didn’t know you knew so-and-so, too!”

One of my favorite discoveries concerned a woman I was acquaintances with back in high school.  Her husband lived across the street from my best friend when we were growing up and our mothers worked at the same insurance agency–all back in Michigan.  Once Facebook really got rolling, I realized that Aimee and John lived just two hours south of us (which is the equivalent, more or less, of living on opposites sides of the same neighborhood, as John and I did as kids).  Four Michigan transplants (my husband, me, John and Aimee)–four Forest Hills Central High School classmates–living a stone’s throw away from one another in Montana.  I love that.

There are so many more examples that simply aren’t coming to mind right now–I think I am still in meditation mode from my appointment earlier.   And while maybe this isn’t that remarkable to other people, it just wasn’t something that happened often in Grand Rapids, Michigan.

The “threads” weaving from one person to another provide me with a sense of belonging–that I am an important part of the web of human beings who populate this beautiful place.  And that is a reason I love living in Montana.

This is a good reason, too.